For week 30, Caleb plays How Great the Wisdom and the Love; 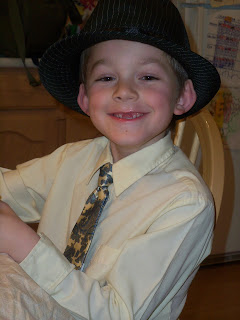 It was over 2 years ago that Caleb was first introduced to music by Aaron Waite.  His arrangements seemed to connect with Caleb's style.  As Caleb loves so many of Aaron Waite's arrangements, he had to play a few more for Sundays @ 6.

For week 27, he plays I'm Trying to be Like Jesus;


For week 28 he plays a short little arrangement of Israel, Israel, God is Calling;

For week 31 he plays The Morning Breaks;

Week 32 he plays I Need Thee Every Hour.  It's melody is somewhat hidden in lower notes, see if you can catch it.


Week 33 he plays a favorite, I Love to See the Temple;

Aaron Waite actually lives somewhere near Caleb although they have never met.  They have exchanged emails and messages on facebook.  Someday Caleb hopes to meet Aaron Waite in person.
Posted by Becca at 9:29 AM No comments:

Caleb made many people happy when he chose the well loved song "Amazing Grace" for week 26 of Sundays @ 6.

He thought it was funny that his dad couldn't pick out the melody very well.
This arrangement was written by Chas Hathaway, who is somewhat a new age pianist/composer.
While some may like a more traditional hymn arrangement that is very true to the original, Caleb enjoys it when the songs are arranged a little fancier.

Here he is playing an arrangement of Amazing Grace which may be a little different than the original classic tune, but it is all together beautiful to listen to.

By the time Caleb turned 10 years old, he had been doing Sundays @ 6 for a few months.  His grandparents  were fans of a pianist named Marvin Goldstein, and so for a birthday present they gave Caleb a couple of his hymn arrangement books.

Here he plays Love One Another for week 16;

After a month stretch of Christmas songs in December, he comes back at week 24 with
Teach Me to Walk in the Light;

Here is week 25's performance of Love at Home;

Marvin Goldstein's arrangements seem to follow a basic pattern.  It seems as if they start very simple and similar to the regular hymn for the first part, and then they gradually get fancier.
Posted by Becca at 10:08 PM No comments: 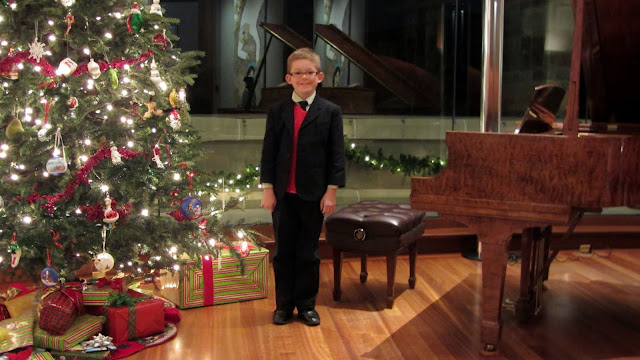 Caleb was really excited when the Christmas Season came around.  If there is anything that Caleb loves as much as playing church song arrangements, it is playing Christmas songs.  Luckily they go hand in hand.

For the 1st week of December, week 20, he played Away in a Manger by Marshall McDonald:

He really liked an arrangement of O Come O Come Emmanuel by composer Marshall McDonald, but he really liked it when it was played with a cello arrangement as well.  Caleb doesn't know anyone who plays the cello, and the music was too hard for his sister to play on her violin, so he came up with a different plan.

He worked with his mom and dad to come up with a way he could play the piano part and then have his dad  sing words to the parts where the cello would be playing.

It turned out really well and they even played it and his dad sang in church.

Here is week 21 with Caleb and his dad;

For week 22 he played Silent Night;

For the last week in December Caleb got to have a really fun Sundays @ 6.
Earlier a friend had asked if he would come play in her church with all his sisters and brother, so they came up with a way to incorporate 4 different instruments all together.

He liked an arrangement of O Come O Come Immanuel by Chas Hathaway, and it had guitar chords that his brother could use, but then his sisters still needed a part.  Together they worked it out so they could sing, play guitar chords, but also fingerpick, and play violin with the piano part.

That was all great for 3, but what about his baby sister?  She was still little and couldn't play much besides some hand shakers or a little toy drum, and this song didn't really go with those.  Finally they decided on a hand bell she could ring.  They got it all organized and the end result was really special!

Here are all the kids playing their creation of O Come O Come Immanuel for week 23;

It is true that Caleb always plays a different church song arrangement each week for Sundays @ 6, but that doesn't mean he can't play the same hymn but in a different arrangement.

One particular song that he really likes is the children's song "My Heavenly Father Loves Me".
By the end of a year of Sundays @ 6, he will have played it in 3 different arrangements.

Here he plays a pretty arrangement by Sharon Austad Bagley for week 19;

Caleb began Sundays @ 6 in the Summer when he was 9 years old.
By the time it was his birthday a few months later, much of his family had seen Sundays @ 6 and so for a present they got him some new piano books of hymn arrangements.

One of the piano sheet music books he received was a book of hymn arrangements by composer Marshall McDonald.  Caleb liked his arrangements right away.

Here he is again for week 17 playing Be Still My Soul;

And here he plays If You Can Hie to Kolob for week 18;

These particular weeks were very busy and so Caleb barely had time to pick which song he wanted to play a few days before or even the night before in some cases.  I'm sure if given the chance they could have been a little smoother, but sometimes Sundays @ 6 songs are only rehearsed once or twice before uploading (and with rehearsed, I mean played through the first time ever).
Posted by Becca at 10:03 PM No comments:

Caleb loves to play piano and while he enjoys playing all sorts of music, he has a special love for playing church songs and hymns. Traditional hymns are pretty, but Caleb has enjoyed seeking out new and creative arrangements of hymns. By the time he was 7 years old, he began playing several different inspiring hymn arrangements for care centers, churches, and other organizations. He developed such a love for these church song arrangements that he decided to create "Sundays @ 6" where he would play a new arrangement every week for everyone to enjoy.
Each week Caleb finds a new church hymn arrangement to play. It is often that he only downloads it or receives a new song the day before he records it, so it is often inspiring in itself that he is playing a beautiful arrangement the 2nd time through when we record it.
Through Sundays @ 6, Caleb has become friends with many different composers and talented pianists. He has been asked to play all across the state and has traveled out of state to play for churches as well. He has inspired and touched many with his true gift of music.
Sometimes Caleb invites other "special musical guests" to help him perform a song, and sometimes he even creates his own musical arrangements of a hymn to play.
Nothing brings the feeling of reverence, love and peace more than the presence of a beautiful hymn. We hope you enjoy these hymn arrangements and may they bring warmth into your lives!